Let Kids Decide Their Own Spending 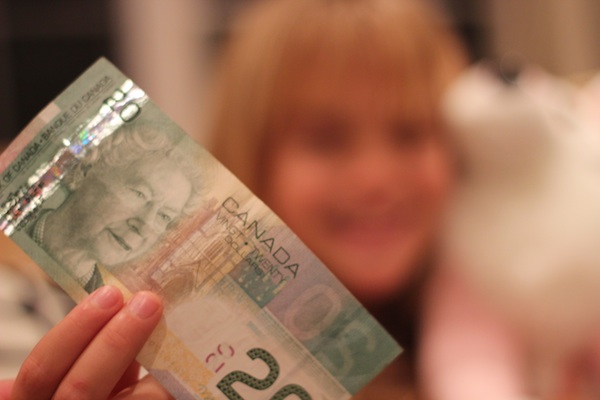 There’s a lot of debate in the parenting world on whether or not children should earn an allowance. And even without a formal allowance kids will still get money from grandparents, or from the tooth fairy, etc.

My wife and I both agree it’s important to let kids learn the value of money early on. We started giving our kids an allowance when they were 5 years old, and I happily admit we could have started this sooner. Even by the time my girls were 6 and 8 year old, they were only getting $1 and $2 per week respectively.

We setup these allowances to reward the girls for basic skill building. They make their beds, get dressed for school in the morning and they love to help set and clear the table at (and after) dinner. They also occasionally get money from the Tooth Fairy, garage sales, lemonade stands and their grandparents.

We’ve always encouraged our girls to save up for things they really want to buy.  Catalogues from the local book store and toy store often help motivate them to save. Just by putting them in charge of a small amount of money it encourages them to better understand arithmetic, and to put a value on money.

Saving money is important but so is learning how to spend it.

And for that matter, learning now NOT to spend it. The other day I was at the toy store with my youngest, Liz.  She’s 6 years old as I write this. She’d saved up about $20 from weekly allowances and a garage sale where she parted ways with old toys in order to raise money for new ones. Liz knew she wanted to buy a new stuffed animal called a Beanie Boo. They’re very cute, and not overly expensive.

As she chose her stuffed animal, I looked at books with my older daughter, Anne. After a few minutes, Liz came over to me with two stuffed animals. And this is the part where I had to remind myself it was her money, and she had to decide how to spend it. Being frugal, I immediately thought to myself, “Kid … you have about 20 of these things at home already. Do you really want to waste almost $20 of hard-earned money on this?”

I bit my tongue. Instead, I asked a casual question.“Oh I see you’ve picked two really cute stuffed animals. How much will that cost?” My thought was to let her answer the question, or help her with the math so she’d have a full understanding of the cost. Then she could decide what to do without any pressure from me.

Whenever your child spends money, one of two things will happen:

Action for parents: Loosen your grip. Let your child make his or her own decisions with his or her money. They are going to make mistakes. Mistakes are valuable. Mistakes are part of learning. If you want your children to grow up understanding how to budget and save, and have healthy thoughts about money, let them screw up. It’s actually helpful in the long run. It’s also a nice way of getting them engaged in doing some early math, when they might otherwise have no interest in sitting down to do arithmetic problems.