Dealing with three year old behavior can be really stressful when you’re not sure how to handle it. Every parent knows that so-called “bad behavior” starts with the Terrible Twos and often gets worse before it gets better. Shall we call them the “tortuous threes”?

They are mobile and expressive: Toddlers can move around faster than you can blink. They know what they want and they’re used to taking or asking. If you say “no” they’re great at screaming until you give in.They understand emotion (their feelings), but not adult logic.

They want to do stuff by themselves: Three year olds can tell you what they want to have, or what they want to do, they want to be allowed to have it (or do it). They want to push the boundaries and try new things. Yet too many parents don’t realize this is how the child learns and gains confidence. If you keep your child boxed into a strict set of rules you risk squashing their inner confidence and willingness to take chances. 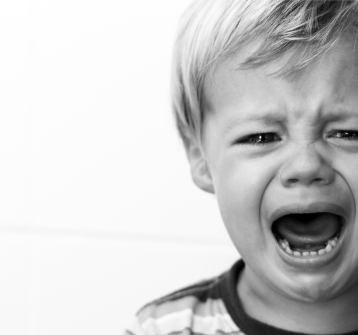 They have short fuses: Most three year olds behave as if everything is the end of their little world. And it annoys the heck out of parents! We just want them to understand that not everything is a big deal, but we get screaming fits and tantrums instead. The parent’s view of the world is in complete misalignment with the child’s view.

Easily distracted: This is not the same as a short attention span. Kids can often focus intently on something that fascinates them. Ever put a cartoon on Netflix and see your child zone right out? You can call it focussed attention or even trance. But when it comes to something a child wants … it’s often easy to distract your child from the situation and avoid a fight. This si really handy for those moments when you hear, “Mommy I want that toy!”

So How Do You Deal with Three Year Olds?

I’m a big believer in using language as a tool. And since your three year old is now able to express himself much more clearly than a year ago, this is a great time to use language.

The most important language tool is to do something I call “entering their world”. If your child doesn’t feel like you understand him, or at least that you are trying to understand him, you’ll encounter a big wall of resistance. What happens next? Welcome to tantrum-ville.

You can enter your child’s world by simply telling your child what you know to be true about his situation. Quick example: “Tommy, I know that you want to play over here with this toy.” Next you can build upon this rapport with an amplification statement such as, “…and that sure does look like a really fun toy. I bet you really like the nice colors!”

Doing this is like magic. Please don’t overlook it as simplistic and childish. It’s supposed to be! You’re dealing with a child! You need to enter their world and that’s how you do it. The moment you do, your child is more calm, and open to distraction, suggestion, humor, or logical consequences (should you need them).

If you are butting heads with your toddler, always build rapport by entering their world before you try to implement any kind of behavioral change tactic. Otherwise, I promise you that you’ll have a more stressful time and there will be more tears. You’re mission is to prevent that, right? I thought so.

Say your 3 year old child wants to get a glass out of the cupboard by himself. You can’t have him climbing up on the counter and risking a fall, or having a glass shatter in his face. So you say “no” and you do it for him. He doesn’t understand. He throws a fit. All of a sudden you’re sitting there wondering, “What’s wrong with my three year old’s behavior?”.

It all could have been prevented very easily. How? You first enter the child’s world with a comment such as, “Bobby I’m really proud of you for wanting to get things for yourself. It’s important to learn new things”. I’d even go so far as to be very specific and say, “You want to get a cup down all by yourself. That’s great.”

Knowing that you can’t explain the logic behind the danger of broken glass, you need to shift his attention. I recommend offering a choice where both outcomes are what you want. Grab two plastic cups and put them in the cupboard. Say to him, “Bobby – which cup are you going to get down all by yourself? The blue one or the orange one?” Chances are good he’ll pick one. Then, lift him so he can open the cupboard door himself and take out the cup. Disaster averted.

Maybe he refuses the plastic cups. He insists that he must drink out of a glass cup just like Mom and Dad. After all, kids model their parents. They want to do what we do. How do you handle this?

There are so many possibilities, and I explain them in my “Talking to Toddlers” audio course. But one example would be to use humor as a distraction. First, you’d establish that Bobby wants to drink out of the glass cup and NOT the plastic cup. So long as you’re OK with him drinking (carefully, at the table) out of a glass cup, you probably want to get it down for him.

You take down the cup without giving him a chance to object, but you immediately implement humor. Hold the glass over one eye, looking through the bottom. Start making pirate noises and pretending it’s a telescope. “Arggg … Bobby, I see you down there and I’m coming to get you!” Said in a humorous way, this will almost always burst your child into giggles. Next thing you know he’s completely forgotten about wanting to get the cup down for himself. You’d still want to tell him that you are proud of him for drinking so neatly, all by himself.

The worst case scenario is that none of this will work, and you’ll have to fall back on basic training. You go back to offering him a choice. He can either have you take down the glass cup, or he can take down the plastic cup. You stay calm and unemotional. You make it clear that these are his choices and it’s up to him to decide. If he doesn’t decide, he doesn’t drink. And if he throws a tantrum, you may simply have to leave the room and let him know that you’ll come back after he calms down. I’ve had to do this with my daughters plenty of times. It doesn’t take long before they know the drill.

Just remember that if you yell right back at your child, you are NOT in their world. You’re on the outside. You are raising the stress levels and throwing away your opportunity to either enjoy your child in the moment, or train him to understand a basic household rule. You don’t want that.

About The Author:
Chris Thompson is the creator of “Talking to Toddlers”, an audio course for parents. He teaches parents how to overcome the normal problems that every Mom and Dad faces with kids by learning better communication skills.

Make sure you claim your free parenting audio lesson.

For further reading you might want to check out This One Simple Language Technique Can Make Parenting Toddlers Easier and Why Parents Shouldn’t Spank Their Children.